Excuse my absence but senior year is busy for me!


Of course, I have to stay in touch with all my vegan followers! So whats new? My club at school started up again and let me tell you we are going to get things done this year. Our campaign right now is to get vegan food in our cafeteria. We are working on a garden for our school as well.


Also as well I am having a vegan potluck celebrating my birthday next weekend. I am so excited!
Posted by Soypunk at 9:21 AM 2 comments:

And this is coming from the person who once said "I can never be vegan! I LOVE ice-cream too much!" or "I'm helping animals just by being vegetarian" and even "Vegans are no more superior than I am, I am helping just as much as they are!"

Boy was I so wrong. The best way to help animals, save our environment, Save our oceans, and have a more peaceful environment is to go vegan.

One big excuse people make is saying they get no support from there parents.
Well my mom NEVER supported me. I had to do it all on my own. When I first became vegetarian she just thought I was a picky eater. And when I told her I was going to be vegan she freaked. She said I wouldn't eat anything but I did it anyway. My friends aren't oh so supportive either. With constant questions/comments like: "what do you eat?", "just go back to vegetarian" "omg you're too extreme" it can be annoying but as long as YOU know that you are making a difference thats what really matters. As long as you stick to it thats what matters.

Another excuse is "I can't afford to be vegan" LAMEST excuse ever. I live in a low-income family my mom is a single mom and I have two brothers and two sisters. My mom gets help from the government with $200 a month ONLY. Thats a little bit for a big family. But I'm STILL vegan AND healthy! I eat things anyone has in their household. Things that everyone buys vegan or not. I eat grains, beans, rice, lentils, vegetables, and fruits. I get my calcium from soymilk. I rarely eat meat subsitutes they are NOT necessary. Sure I spoil myself to fancy vegan meals once in a while but its not neccesary anyone can be a cheap vegan and still eat delicious.
In the generation we live in it has never been easier to be vegan. We have vegan apps for people with iphones and millions of websites dedicated to veganism and animal rights. Along with my favorite blogs:
http://theveganstoner.com/
http://veganyumyum.com/
http://quarrygirl.com
GO VEGAN
Posted by Soypunk at 2:21 PM 1 comment:

I know we all have those days when we just want to make a quick meal and eat already. Sometimes I don't feel like spending so much time in the kitchen. So I make lentil tomatoe soup it is delicious especially on a cold day <3


Directions:
1. Heat a large soup pan on medium heat. Add the olive oil and saute the onions and garlic until translucent (not browned).  Pour in the apple juice and allow it to bubble to deglaze the pot and burn off the alcohol.

2. If using dried herbs, stir them in now, followed by the lentils. Pour in the water and boil for 30 minutes or until the lentils are softened. Stir in the tomatoes and sea salt and leave for 10 or preferably 20 minutes.

3. Stir in the greens a few minutes before serving so they wilt. If using fresh herbs, stir them in now.

4. Garnish this lentil tomato soup recipe with fresh herbs or a roasted nut or seed and enjoy. 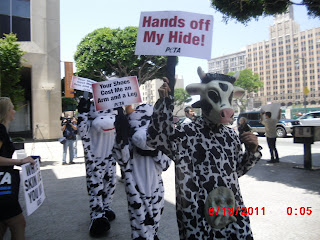 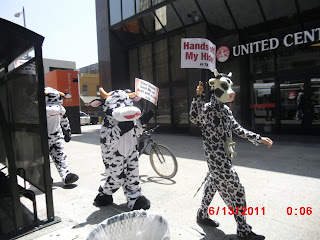 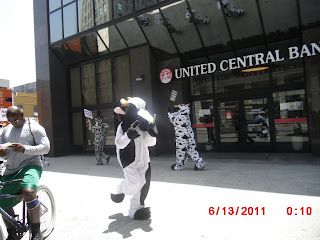 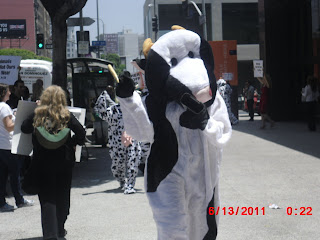 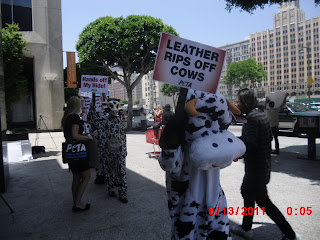 Yesterday I attended the La Show Show protest against leather. PETA organized it even though I got an e-mail from them saying to join them it felt like I was just watching them. It was cool how they got there message out. They dressed up as cows (as you can see in the photos above). Cars passing nearby honked at them and waved. PETA also passed out flyers about the leather industry.
Did you know?
Most leather comes from other countries like China or India. The animals have their throuts cut and there skin (fur) is torn from them all while they are still conscious! Watch a video and trust me it is horrible!
Don't wear or buy leather!
"Every year, most of the millions of cows slaughtered for the leather industry endure castration, tail-docking, and de-horning—all without being given any painkillers. Leather is also bad for the environment: In order to preserve the skins, companies use toxic chemicals that can end up in nearby soil and water supplies."
Posted by Soypunk at 2:08 PM 1 comment:

So I googled Vegansexual yesterday and the urban definition is: A vegan who refuses to have sexual relations with a non-vegan. Makes sense right? The term "vegansexuality" was coined last year by Dr. Annie Potts, co-director of the New Zealand Centre for Human and Animal Studies at the University of Canterbury. Its not a cult as many claimed it was (on google) its a "new" category for sexuality.

If you are what you eat then meat eaters are basically a walking graveyard. I can see where this is a little uncomfortable. Sometimes a vegan and a meat-eater can make it in the realationship. But sometimes there is too many differences.I think it's perfectly natural that some vegans would have a strong attraction to other vegans over meat eaters.

This makes sense in a way. I admit I do have a boyfriend that eats meat but sometimes i do wish he was vegan. I know very little people who are vegans and I haven't really met a vegan guy yet but I do wish <3
I think me being vegan makes it a big part of my life and I would like to meet a vegan guy someday or maybe convert my current boyfriend into a vegan.

Thats another thing sometimes if you're with a meat eating boyfriend you can influence them to go vegan. Being in a relationship makes it easier to be more open about feelings and such so why not bring up veganism? I won't label myself anything ever! Not gay straight or bi. But I must atmit vegansexual makes sense!
Posted by Soypunk at 2:30 PM 1 comment:

(Amount per ingredient varies person to person based on your liking)
Ingridients:
-Bow tie pasta. (Make sure its vegan!)

Cake Mixes & HOSTESS products!! = Beef fat!
Of course if you're vegetarian some find it okay  I guess. I can't really define vegetarianism. But beef fat is a common ingredient in many boxed cake mixes. They list it on the ingredients as lard! Beware all Hostess products they all contain beef fat. I wouldn't even consider that vegetarian!
Red Candys = Beetles

Red candies often contain red pigments extracted from the female Dactylopius coccus costa, or cochineal insect. Red bug dye is typically listed as cochineal, carminic acid or carmine in the ingredients. its even found in things like wine, vinegar, juice and colored pasta.So be very careful. Read labels! Many candies are also coated with shellac, a resin excreted by the lac bug, which is usually listed as confectioner’s glaze.

Beer & Wine = Fish Bladder
Some beers and wines are made with fish bladdr.This happens because a membrane taken from the bladders of tropical fish, is used to filter cloudy yeast extracts out of many brands of beer and wine.
If you have anything else to be listed e-mail me! soyypunk@hotmail.com
Posted by Soypunk at 2:50 PM 1 comment:

Veganism is a diet rooted from indigenous culture. In fact, Aztecs and Indians in south america lived mostly on a vegan diet rarely eating meat on occasion (and this happened rarely!) Yet things changed since the arrival of European colonists.
European colonists were the ones that introduced red meat to indigenous people such as beef and pork. Because before the europeans took over natives had a different view of animals. They actually had a relationship based upon respect and responsibility. They took care of them and looked at them as if they were friends. They were treated equal and weren't looked down upon.
Natives had the believe that animals were not made for food, but willingly became food as a sacrifice for their friends where as white hunters perspective is that animals are constructed to require population control, justifying slaughter into a service performed. (Which side sounds better?) 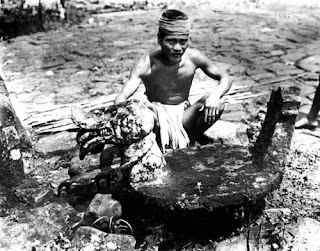 Maybe our world would be a better placed if we had that mentality. Don't you think? That animals are equal to us and they are our friends. 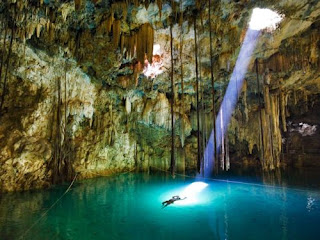 So when people of color complain about it being hard being vegan because they're mexican or puerto rican, etc. the white people were the ones to introduce us to meat. Indigenous people lived a vegan lifestyle and lived a compassionate life. So why can't you. Anyone can be vegan if you're white brown yellow it doesn't matter. Go vegan!
Posted by Soypunk at 2:47 PM 2 comments: 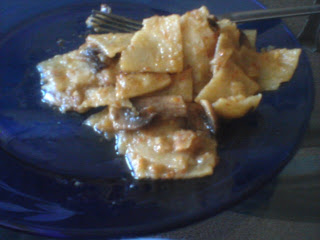 So here's the thing about this recipe. It was an accident! I know as you can probably tell it doesn't look all that but trust me it is delicious. I was at my boyfriends house and he was eating egg chilacile and i was starving so he decided to make me something like it but vegan style. I am a complete control freak so i didn't want him to cook i wanted to know what i was eating but he insisted on cooking for me so here is what you will need: (For one serving)
1) So once you have the tortillas you cut them into small squares.
2) Meanwhile you leave that aside and start with putting the vegetable oil in the pan and leave it tio heat for 30 seconds. Then you put diced onion and it wil start sizzling. Then you put the mushrooms in. Mushrooms don't need to be in there for long so you take them out once they are a brown or golden color.
3)You take them out and then start frying the tortillas until they are golden. Then you pour the chili sauce (preferably red) and then the ,ushrooms with onion.
4) by then its about down and well mixed you take it out and eat it. Trust me it is very good I love it <3
Posted by Soypunk at 2:13 PM 2 comments:

Vegan lunch on the Quick! 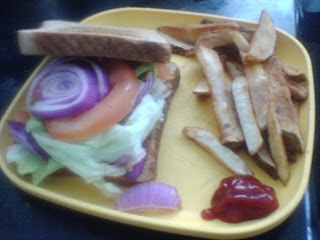 Has any of you ever craved fastfood? I know i have! Especially ,u favorite In'N'Out!
So on the weekend i was starving and i decided to make fries and with fries i wanted a good sandwich!
Heres what you'll need: 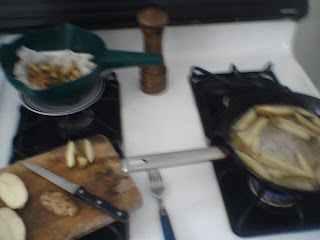 1. So first you cut the potatoes into slices. I like to keep them with the skin but you could take that out if you like.
2. Next you heat the vegetable oil and put in the potatoes pieces. Make sure to move them around. You remove them once they are golden brown. And you add salt. (sorry about the bad pictures there from my phone)
The Sandwich:
1. For the sandwich I prefer toasting it but you don't have too.
2. Instead of mayo I put ketchup on one bread and avocado on the other.
3. After you just put the lettuce, tomatoe, and onion.
Trust me this is one of my favorite lunches to eat its super quick and super tasty. I recommend everyone to try this!
Posted by Soypunk at 2:40 PM 2 comments: